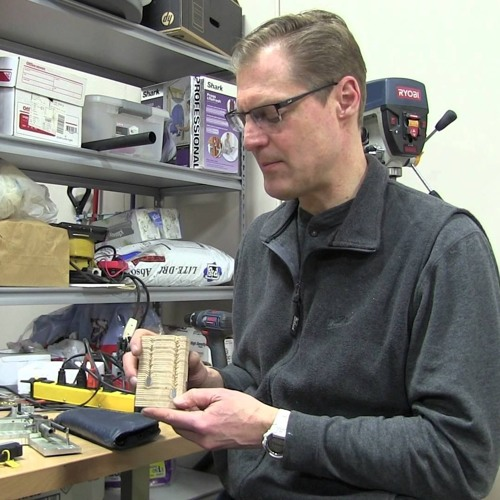 Arne Boberg is an award-winning design engineering specialist at 3M. He is also the founder of Boberg Arms, which he sold to Bond Arms in November of 2015. Boberg Arms is the original creator of a revolutionary “bullpup” handgun design, the Boberg XR9-S.

With 23 years in manufacturing and machine design, and 10 years in product design, Boberg used his truly unique perspective to accomplish what gun manufacturers have struggled with for nearly 100 years. A longer barrel in a shorter gun.

Listen to the interview with Arne Boberg

To non-engineers, fitting a shorter barrel in a hand gun seems straightforward. But it’s anything but.

Because he solved the very problem plaguing gun manufacturers for generations you’d think he would be welcomed with open arms, but that didn’t happen. When he presented his design to the biggest gun manufacturers in the world, they simply told him it was impossible to build. Getting no support, he built it himself. It worked.

Not only was the Boberg XR9 and later, Bullpup9 a success, but it performed exactly as Boberg had predicted. Longer barrel, more velocity, and a smaller package.

It also solved a problem in the handling of a firearm called “limp wristing” which causes failure to eject problems if someone isn’t holding the handgun properly.

The most amazing thing is how the gun operates. Because Boberg had to account for current ammunition available on the market, he designed a clever “claw” that would pull the ammunition backward into the back of the gun, positioning it into the barrel.

Before this interview, I wrote a piece about Arne Boberg and his unique approach in The Washington Post on May 19th, 2014.

To get an edge on the market, manufacturers have offered lighter, smaller guns, laser sights, and numerous safety enhancements. Some companies have even been working on smart guns, with a goal of only operating in the hands of the owner. But none of these developments are significant advancements that truly separate any manufacturer as a front-runner.

Enter Arne Boberg, an award-winning engineer, and scientist who has worked for companies such as 3M and Imation Corp., winning the CES Engineering Excellence Award for audio/visual accessories in 2009 for his novel flat panel mounting design. With a passion for firearms, creating some of his own at the age of 12, he set a goal for himself to address one of the biggest challenges in the industry. He would do whatever it took to fit a full-size handgun barrel, into one of the smallest pocket pistols in the world.

How Does The Bullpup9 / Boberg XR9 Work?

Check out this fascinating animation to understand how Arne Boberg’s revolutionary “claw” design extracts and places a single round of ammunition.